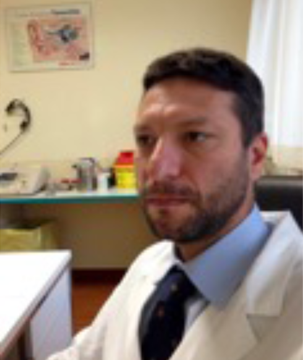 From 2010 to 2015: Head of Department Otolaryngology II AM Medico Legal Institute of Rome

From November 2008 to November 2012: Head of the 1st of Medicine Section of Labor Infirmary Main A.M. From Rome;

Since November 2008 Consultant Otolaryngologist at the Infirmary Main A.M. of Rome.

From July 2004 to October 2005: Medical Director of the inhalations and diagnostic center Ent of the Terme di Fiuggi (FR).

In 2006, Specializated in Occupational Medicine at University of Rome “La Sapienza” School of Medicine

In 2002, Specializated in Otolaryngology head and Neck Patology at University of Rome “La Sapienza” School of Medicine

In 1997, Degree in Medicine at University of Rome “La Sapienza” School of Medicine

FOCUS: Expert on diseases of ENT district whose emergence and evolution is linked to the activities -working and not – at high altitude and in flight. The main area of interest is the study of the vestibular system at a preventive level, diagnostic and therapeutic all aimed at finding new treatments for patients suffering from dizziness or unsteadiness.

Professor in “Hygiene” and “Medicine of the “Bachelor Work” D “in” Nursing “The year at” University Sapienza “of Rome.